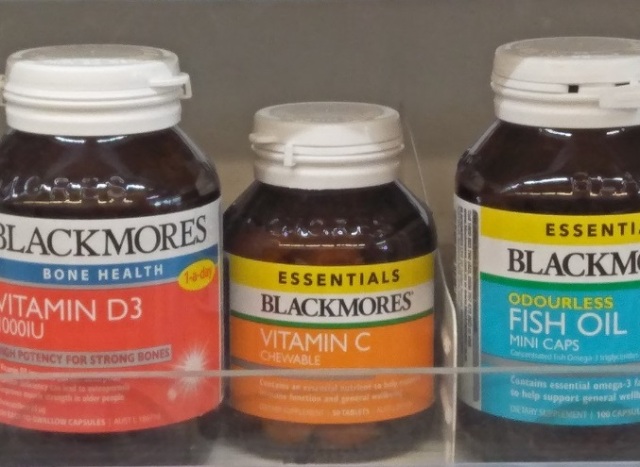 Vitamin D is mostly harmless. Sure, it can cause toxicity (mainly hypercalcaemia), but usually at megadose levels of around 60 capsules per day.

Vitamin C is also mostly harmless. My parents, advised by the medical zeitgeist when I was a child, gave us one citrus-flavoured tablet every day during winter.

And extracted fish oils are mostly harmless, except of course to the extractees: the fish.

Another thing these three supplements have in common is that they are all wildly successful products of health marketing. Marketing that uses ordinary doctors to amplify the message…doctors like you and me.

Arthur Dent (upon reading the description of planet Earth in The Hitchhiker’s Guide to the Galaxy): “Is that all it’s got to say? Harmless! One word?”

Ford Prefect: “I managed to transmit a new entry off to the editor. He had to trim it a bit, but it’s still an improvement.”

Arthur: “And what does it say now?”

As highlighted recently the US has seen almost a tenfold increase of vitamin D sales in the last decade compared to the previous. Yet a recent meta-analysis  of 33 randomised trials showed that vitamin D or calcium supplementation has no effect on the incidence of fractures.

After years of venerating the “D”, it seems the vitamin is more often a marker associated with an illness rather than its cure.

Fish oil supplements have gone from being unheard of when I trained (we had heard of fish, and vaguely knew they contained omega-3) to earning manufacturers an estimate $77 billion annually by 2025.

The phenomenon began with researchers surmising that the low rate of cardiovascular deaths among 130 Inuit people in Greenland might be related to the fish (unencapsulated) in their diet. Yet last month’s Cochrane systematic review of every good RCT ever conducted (all 79 of them) found no beneficial effect of fish oil supplementation on ischaemic heart disease, stroke, cardiovascular deaths or all-cause deaths.

I’m beginning to suspect a connection between mostly harmless and mostly useless.

The astounding sales figures ride on the back of many factors; marketing, luring the media with a good story, evidence (and evidence manipulation), and the fact that supplements probably do actually help a small number of those who take them.

We doctors don’t live on a desert island; all the above factors also influence the medical profession. Not just the doctors who are paid to be go-to experts. They might speak at educational updates – in the US some have their own TV shows – but we humble GPs don’t share in that pie.

I’m talking about honest, independent doctors who read articles in medical journals and popular magazines, and hear at family barbecues how fish oils have been proven to fix arthritis, and can stave off the atherosclerotic effects of sausages. Inevitably, the weight of suggestion from all sides – at work and home – places these natural supplements top in our mind. “Natural”, in an artificially concentrated sort of way.

It can feel kind of a relief that we have something fairly benign to suggest to patients with osteoporosis or cardiovascular risk. And, when the storm clouds gather after we refuse antibiotics for a virus, it’s nice to instead fly somewhere over the rainbow where trouble melts like lemon drops—full of Vitamin C and available from your local pharmacy.

Many doctors have occasionally done it, and that doesn’t make them wrong, nor bad doctors. They are trying to help their patients, and occasionally it might even work.

But we should be aware that a million of us doing it is surely about the most effective form of marketing there is. A manufacturer’s dream: free promotion, done with the best of intentions from a trusted source.

We have been unknowingly complicit in a distortion.

I guess, in the scheme of medical transgressions, we could do far worse things than over-recommend vitamins.

After all, except for the billions of dollars flushed away each year, they are pretty harmless.

Justin is a GP in Brisbane and Director of Education for GPs in the NT. He edits a medical journal and two medical textbooks, and is a medical writer and educator. Further details at https://drjustincoleman.com/
View all posts by Dr Justin Coleman →
This entry was posted in medical writing and tagged complementary medicine, GP, marketing, pharmaceutical, sceptic, vitamins. Bookmark the permalink.