Why ‘medicine for the rich’ is sometimes inevitable

Player #1: The Australian PBS, which has just released this year’s list of top 10 pharmaceuticals by expense (see table below)

Player #2: The Social Medwork, a new company which imports high-end drugs, for a fee

My verdict: Sorry, that’s life. The public can’t afford to pay for everything.

THE DILEMMA posed by high-cost pharmaceuticals isn’t one likely to go away any time soon.

With hepatitis C treatments clocking up their first $1 billion in just four months, PBS budgeters must be sweating.

However, they would also be relieved that they didn’t cave in to the campaign – backed by the manufacturer but involving patient advocacy groups and some doctors – to approve the drugs earlier at an even higher cost, as happened in the US.

Coming second on the PBS expense list, at half a billion, are two macular degeneration drugs with their own cost controversies.

The manufacturer of ranibizumab (Lucentis) has been heavily criticised for purchasing the patent on its only competitor but not doing the head-to-head study that might have allowed approval for the cheaper drug. Back then, Lucentis cost 50 times the price of its competitor, and it remains the gift that keeps on giving, near the very top of this year’s PBS spending. Merry Christmas, shareholders.

At the top end of the market, where high-rollers spend public funds on the promise of clinical benefit, it is no surprise that a new player has entered the room. A Netherlands-based company has just created a new niche for those customers who can afford it.

The Social Medwork offers an import service for medications which have been approved by US or European regulators, but not yet approved by the Australia’s TGA.  No public funding is involved, so the user—a patient—pays the company to purchase the drug and go through the hoops of legally importing it into Australia.

The drugs typically cost tens of thousands of dollars per course. Importing them requires a prescription from an Australian doctor, likely to be an oncologist, ophthalmologist or rheumatologist, based on the current drug options available.

One ethical question this raises is the principle of differential cancer treatment based on one’s ability to pay. An article in today’s Guardian asks “Is it medicine for the rich?”

However, I don’t see this as particularly troublesome.

Clearly we can’t—and shouldn’t—publicly fund every new high-cost drug, even if it does some good. Each time it approves a drug, the PBS has an obligation to consider not only clinical benefit, but also the opportunity costs which could have been spent elsewhere.

We will inevitably always have situations where an expensive treatment will only be available privately. This is nothing new.

A friend of mine, very unwisely in my view, paid for his partner to attend a horrendously expensive alternative healing camp in Mexico for her metastatic colon cancer. The issues for me were safety and false health claims, but I did not at any stage believe that he didn’t have the right to make that decision as to how to spend his money.

Importing expensive drugs is not without problems – in particular, the patient and doctor may have limited information as to the degree of benefit. However, I don’t see a problem with a company testing the market and setting up shop.

It’s a matter of ‘buyer beware’.

This article was first published in Medical Observer, Dec 2016 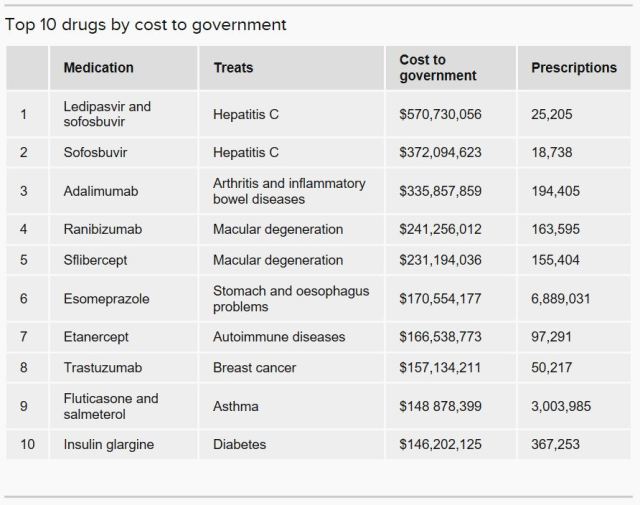 Table reproduced from ABC News website, from an article by Imogen Brennan, 5 Dec 2016.

Justin is a GP in Brisbane and Director of Education for GPs in the NT. He edits a medical journal and two medical textbooks, and is a medical writer and educator. Further details at https://drjustincoleman.com/
View all posts by Dr Justin Coleman →
This entry was posted in medical writing and tagged cost, doctor, importation, Medical Observer, pharmaceutical. Bookmark the permalink.