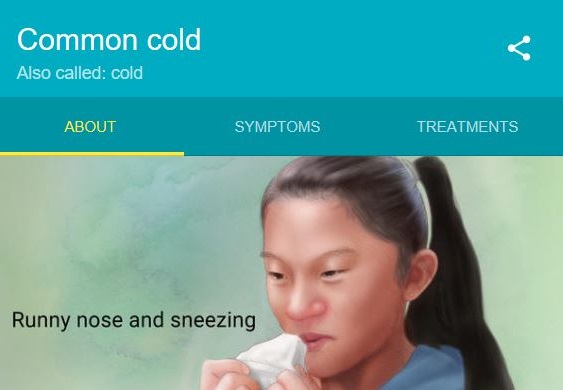 Google’s new health cards became active in Australia just a few hours ago, so I figured I’d be first to give them a test run.

Health cards are Google’s attempt to give the lay public sensible and evidence-based results on searches for medical conditions.

The ‘cards’ appear as a stand-alone box to the right of the usual Google search results, and contain a few sentences and a picture.

For example, when I type in ‘cold’, the usual, familiar results appear – first is my local weather (despite today being decidedly warm!) followed by the hits from more than a billion search results.

But in addition, a new box automatically appears, labelled ‘Common cold’. It contains an artist’s impression of nose-blowing (happily, a ‘before’ image with the tissue still clean) and three clickable sections: About; Symptoms; and Treatments.

Each section typically contains a couple of brief statements and some dot points. The health information is general, but accurate, having been developed in conjunction with doctors from the Mayo clinic. No unpleasant surprises suggesting your cold might require antibiotics.

There are no links to expanded information, so presumably Google expects you to use their normal search engine for extra detail. 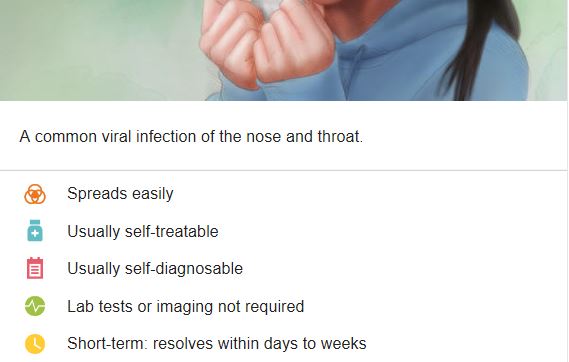 The content is written for a US audience, with an inconsistent smattering of Australian spelling; the brain ‘tumor’ title page has ‘tumour’ written throughout the text. Podiatrists are ‘chiropodists’ and dietitians ‘nutritionists’.

Of more concern is that GPs are mysteriously referred to as ‘Primary Care Providers (PCPs)’, so those with a common cold are asked to consult either a paediatrician (why on earth?) or a PCP. A choice between the unsuitable and the unfathomable.

But overall, I like this initiative. Google tells us that one in 20 of its searches involve health-related terms, so these health cards make for a pretty sensible first search hit. They certainly contain far more accurate and reliable information than many other hits; just try typing in ‘lyme disease’.

The biggest drawback I could see initially is that the boxes are hard to conjure up, as it often requires typing in the exact term the authors were thinking of. For example, while ‘asthma’ and ‘appendicitis’ bring up appropriate health cards, nothing appears after typing ‘asthma diagnosis’ or ‘appendix pain’.

Symptoms such as wheeze, rash, and fever also draw blanks, but that is probably a good thing.  Diagnoses are best made by your doctor—or perhaps by your PCP, once you have Googled the acronym to find one.

But I’m nit-picking when my main complaint about a resource that didn’t exist yesterday is that it needs expansion. They have launched with only 900 health cards, and that’s a great start. Each box has a ‘feedback’ link to improve the system, so it will only get better over time.

My first feedback suggestion will be to use consistent Australian terminology and spelling.

This article was first published in Medical Observer, 2 Feb 2017

Justin is a GP in Brisbane and Director of Education for GPs in the NT. He edits a medical journal and two medical textbooks, and is a medical writer and educator. Further details at https://drjustincoleman.com/
View all posts by Dr Justin Coleman →
This entry was posted in medical writing and tagged diagnosis, google, health, health cards, medical, Medical Observer. Bookmark the permalink.