How Melbourne Uni survived 20 years without me 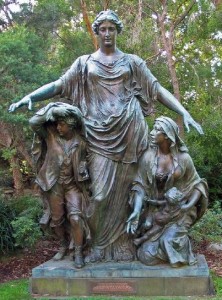 Monument to my dreams as a young man.
(My dream was the one in the middle)

As I walked through the grounds of Melbourne University last week—my first time for twenty years—I decided to dedicate this column to medical students.

I felt poignantly nostalgic about my own experiences, and also judged it an opportunity for a cheap laugh at the most vulnerable fish in the pond. Nothing like a good belittling to toughen their scales: necessary armour if these minnows are ever to grow up to swim with the College of Sturgeons.

I had arrived at Uni on a crisp Melbourne morning, an hour before I was due to lecture, and strolled across the glistening South Lawns. The only change was a new statue of a scantily clothed angel, uncannily reminding me of my 18-year-old attempts to study anatomy while lying on those very lawns, amidst clusters of fine arts majors.

I paused at the entrance to the Brownless Medical Library, feeling a sense of pleasure previously only ever experienced at its exit. Inside, I managed to locate the same, thick volume of Muir’s Pathology that had supported me all those years ago. It had always been a little firm on the cheekbone, but had raised my head above the desk just enough to curb snoring.

Many of the old shelves had made way for screens, but of course, only the worst snorers even need touch a book these days. Everyone else is plugged in.

Indeed, on my first day as a medical tutor in Brisbane a decade ago, I realised I was the only Luddite in the room without a smart phone.

Incidentally, that was also the day I stopped just making stuff up. These guys could fact-check everything. It was only when tutoring in psychology that I continued being able to spout baseless generalisations; because Freud did, and even Wikipedia just wings it.

Twenty years ago, we believed everything those sandstone walls told us—vocal fremitus matters, and students can hear third and fourth heart sounds. I even described hearing a fifth until fellow student Smart Alex curtailed my confabulation with a sneer.

Smart Alex had topped Victoria and indeed the entire world in Year 12; if he ever slept on Muir’s, every pathological word osmosed into his giant brain.

But even Alex didn’t know as much as a smart phone, so these days he probably sits up the back of grand rounds, sneering at everyone’s glowing screens as the meeting’s medical mystery is solved by microchips.

‘It’s not lupus, fools!’ he cries, but nobody listens.

Yep, there were brilliant students, average students and even a few fools. But not so foolish that they couldn’t stroll through the morning dew 20 years later, step into the fish bowl of a lecture theatre, and preach to the minnows.

I beguiled and confounded them with my wisdom. But not until I’d made sure everyone had turned off their smart phones.

Justin is a GP on the remote Tiwi Islands at the top of Australia. He edits a medical journal and two medical textbooks, and is a medical writer and educator. Further details at https://drjustincoleman.com/
View all posts by Dr Justin Coleman →
This entry was posted in medical writing and tagged Flippant, humour, Medical Observer, medical student, University of Melbourne. Bookmark the permalink.