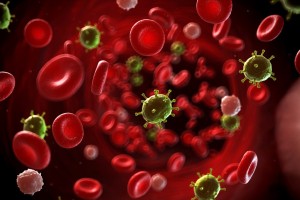 Confusing red and green things in our bloodstream

Last month’s column was ‘Dealing with uncertainty’, and I haven’t got any better at it, so figured I’d stick to the theme. Might even make it a series.

This month’s uncertainty involved a haematologist—I’ve never actually met one, but that wasn’t the uncertainty. I do believe in them, based on the phone evidence.

Anyhow, I listened to him discussing cytochrome p450, then he mentioned HLA-B27, and right about there is where he lost me.

The thing is, I have trouble visualising things named with numbers. Especially little things. If you’re going to float about invisibly in the bloodstream, at least have a sensible name, like RBC.

I can picture those wee scarlet frisbees, no worries. The problem is, in my mind they’re always floating in a sea of confusingly numbered sludge. That’s not just my imagination, because if you leave the RBCs there long enough, some of the sludge will stick. The RBCs degenerate into HbA1c, thereby creating another awful number-name problem.

H-b-A-1-c. Ever tried explaining that five-part behemoth to a patient? “You see, it’s A…then one…then c. Just a sugar-coated red blood cell, really. Hence the H and the b. No, I’m not sure what the 1 stands for. Oh hell, just bump up the insulin.”

I could blame my Scottish haematology lecturer at Melbourne Uni; his thick brogue tore at the names of every tiny particle, rendering them into a formless swill of guttural indifference. If I repeatedly fell asleep as the Glaswegian expounded on what subsequent translators would attest was the B-lymph antigen CD20, who can criticise me?

But I take responsibility. It wasn’t his fault: it was mine. Well, when I say mine, I really mean my microbiology lecturer’s. If you think Scottish haematologists are obsessed with confusing, floating blobs, you should hear Germanic microbiologists.

That’s ‘Micro’ as in super-small, and ‘biologists’ as in the scientists who are still trying to name 950,000 insect species. Believe me, the easy ones ran out long ago.

How tempting would it be for an Amazonian entomologist to just name the next 200 buzzing things with the same root word followed by a number series? The same method I use for my computer password21. Sorry, I meant password.

But back to my microbiologist: he genuinely believed that we students would be interested in staring at bacterial blobs down a microscope lens, because that sort of stuff fascinated him – did I mention he was Germanic?

The enterococci and moncytogeneses  I looked at during afternoon prac sessions fast became just a wash of stains: less H&E or Gram than souvlaki grease from my fingers.

I gave up on microbiology hard and early, vowing never to put patients in a position where I had to differentiate fungal spores from melanomatous skin cells. Instead, I shuffled my way into a medical writing career where I could instead mock those geeks who can.

Not everything I don’t understand is tiny. The brain, for example, is quite large, but I have little idea which bit of jelly does what. For student exams, I rote-learned the various lobes; I think this is called creating my own mind-map.

But then I read ‘Your left vs right brain’ and ‘The brain that changes itself’, and I’ve been stuffed ever since. Surely no one expects me to upgrade my map every time it changes itself? Best to ignore the entire field.

*Sigh* So much incomprehension, so little time.

Next month: ‘Why I should never have become an immunologist’.

This article was first published in Medical Observer, March 2015

Justin is a GP on the remote Tiwi Islands at the top of Australia. He edits a medical journal and two medical textbooks, and is a medical writer and educator. Further details at https://drjustincoleman.com/
View all posts by Dr Justin Coleman →
This entry was posted in medical writing and tagged blood cells, Flippant, humour, Medical Observer, uncertainty. Bookmark the permalink.