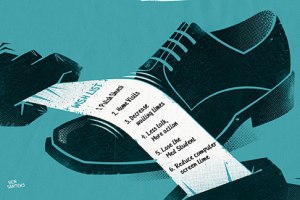 I’M STARTING 2014 with a wish list and some empathy.

Not my own wish list — my patients’. That’s where the empathy comes in.

I’m imagining what changes they would wish upon me, by putting myself in their shoes.

Actually, my shoes are top of the wish list. I keep mine at work because I ride a bike, and I’ve noticed patients are starting to stare at the unpolished bits. This year I’m determined to fix that, even if it means buying some shoe polish.

Number 2 is home visits. I think my patients would like me to do some. It’s hard on a pushbike because I have to change shirt and shoes, which brings me right back to the polish problem. Not the Polish problem: Walesa solved that back in ’89.

Number 3: Decrease waiting times. Now, you and I both know that this is an unsolvable paradox, but even patients can dream, can’t they? The paradox is that the longer a patient waits, the more they feel they deserve a long appointment. Get them straight in and they sense your urgency, but leave them to wait an hour and they’ll have come up with a medical wish list longer than your stethoscope.

Number 4: Less talk, more action. I do tend to soliloquise. Ask about proteinuria and I’ll give you a leaky-kidney analogy involving chicken soup and coffee filter paper. The narrative varies according to time of day: before lunch is more chicken soup, but late arvo is all about the coffee.

This week’s adage: all bodily explanations can benefit from a coffee-related analogy.

Number 5: Ditch the med student. For some reason, many of my patients consider that the doctor-patient relationship is a two-person affair. A mate of mine did his entire physics PhD on the intricacies of three-body interactions, and he assures me that human beings are even more complex than protons.

Unfortunately, given my teaching commitments, I can’t think of a solution to the med student problem, unless perhaps I hide some of the smaller ones in the drug cupboard.

Number 6: Reduce computer screen time. I have already started working on this, making eye contact occasionally regardless of whether the presenting complaint is ophthalmological. My patients are beginning to feel listened to when I look up from the screen, although purists would say I should stop typing as well.

The touch typing plays havoc with my notes: the patient is describing bowel habits and I’m trying to punctuate from memory. We both have colon problems.

So the wish list remains largely unfulfilled. But this year I’m determined to buy shoe polish.

This article was first published in Medical Observer, Jan 2014

Justin is a GP in Brisbane and Director of Education for GPs in the NT. He edits a medical journal and two medical textbooks, and is a medical writer and educator. Further details at https://drjustincoleman.com/
View all posts by Dr Justin Coleman →
This entry was posted in medical writing and tagged Flippant, humour, Medical Observer, wish list. Bookmark the permalink.